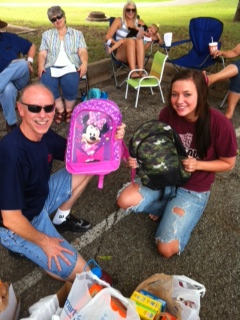 Jay first showed up at the “green” church with an old friend who’d been a part of it for years. He was reluctant but searching for something deeper than he had experienced in the past.

A shoes-for-orphans project began just a couple of months after he’d started coming, and it really sparked something inside him. As a police officer he had led many drug abuse prevention assemblies and it gave him a soft spot for struggling kids. This compassion pushed him to shoe store “sales” and discount stores
looking for sturdy but reasonably priced merchandise for the orphans. As a matter of fact, he was doing more than anybody else in the church, so they asked him to lead the whole effort.

Wow, he took off with new zest once the group expressed that kind of confidence in him. They just followed his example in buying, tying, bagging, and delivering the shoes, and nearly every week he overflowed with personal gratitude about how much it meant to him!

He became passionate about helping others. The next year he not only led the shoe project again, but also wrangled up 1,000 pairs of socks. And, he didn’t just wait for this single endeavor. He started carrying food and toiletries in the trunk of his police car to give needy families he found in serving warrants.

Jay heard about an overlooked foster child sixty miles away and made sure the boy got a basketball for Christmas. He delivered cash from the church to a transplant patient to assist with the heavy medicine costs. When someone was needed to help purchase, bag, load, and deliver 3,000 pounds of rice to refugees
in a nearby apartment complex guess who did it.

People began to see him in restaurants and say, “Hey, I’ve heard that you help people, and I want to give some money (or food or clothes) to help.” Even Walmart started giving Jay big boxes of clothes they couldn’t sell.

This man’s inner self was full and overflowing with helping the persons God brought his way. He says, “Nobody ever asked me to be more than a spectator in such endeavors…this has transformed my life!”